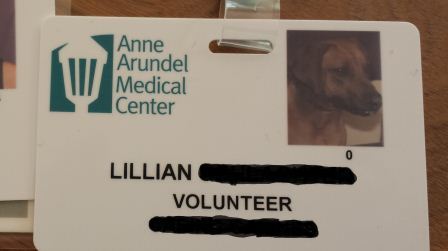 “She’s quite … big,” the volunteer doggie orientation lady offered, as Lillian and I walked through the narrow hallways of the volunteer auxiliary office at Anne Arundel Medical Center.

“She’s just big boned,” I answered. The woman did not laugh. She was clearly not a dog person.

Seriously, you married a person who doesn’t like dogs? Why didn’t you just, I don’t know, go to prison?

We entered her office and I sat down on the edge of the big black chair while Lillian checked the trash. Then she made sure the mop boards were free of debris, before laying down with all the grace of a falling oak tree.

Heidi gave me a bunch of forms. So I filled in blank spaces, and we chit chatted. At short intervals auxiliary members would wander into the room and ask questions, starting them sort of in the middle.

“The flowers, his wife, we’ll give them, he’ll take but how do I tell him?”

We went down the hall, then through the lobby then outside to another building so they could take my blood, to be sure I was healthy enough to cavort among sick people. Here I was required to fill out more paperwork, on a clip board, on a slippery counter top, with one hand while holding Lilly with the other. Lillian is what you might call a two-hander. She is 90 pounds of muscular exhuberance. So my handwriting was sloppy. So was my dog handling.

I twirled around to see the wide-eyed face of a woman just goosed. Lillian is a gooser.

“Uh, sorry, she just really loves people,” I mumbled as the woman adjusted her skirt, then pressed herself, in her chair, up against the wall. “I don’t really like dogs,” she tried to explain.

We escaped by being called into the small lab where I would be most challenged: single- handing Lillian with a needle stuck in my arm. I sat down and silently prayed that she would hold still at least as the nurse fished for my vein. Remarkably, Lillylaid on the floor perfectly still, throughout.

Next we got our ID badges… I bought my AAMC Volunteer smock, and we were done!

We went home, picked up Delilah, and headed to our favorite park to celebrate. All these months of training and form-filling had paid off. We were finally a therapy TEAM! I watched the girls tear around the grassy field. Finally I would be able to share their boundless love and energy with people who were sick or lonely. Certainly Lillian (and hopefully, eventually, Delilah) would bring some cheer to people who need it.

We went home to settle in for the evening, and I saw a message on my phone.

“Hello, this message is for Terese. This is Heidi, from Anne Arundel Medical Center. I was talking with some of the people who saw Lillian today. We think she may not be appropriate for this program. Please call me…”

My happy little heart broke in two. We’d passed! I had my badge! Lilly had a badge! I was smocked! Less than six hours in, and we were being benched.

A couple of days later I returned the badges and the smock. I may not have been that nice to the Heidi ladies. They said we could try again in a year, when maybe Lilly wasn’t so “puppy-like”.

I like that Lilly is puppy-like. And that she occasionally goes up a lady’s skirt. And I understand that not everyone appreciates that. Ridgebacks are not Labradors or Golden Retrievers. They can be stubborn and willful. But mostly they are loving and joyful. They, or rather we, are a force to be reckoned with. And we are on a mission. We are not giving up.

A few weeks later I am sitting in my 19th hour of human training for Hospice pet therapy. I am worried. I tell the group our hospital story.

The volunteer coordinator, a young, pretty soft- spoken woman, threw her head back and laughed loudly.