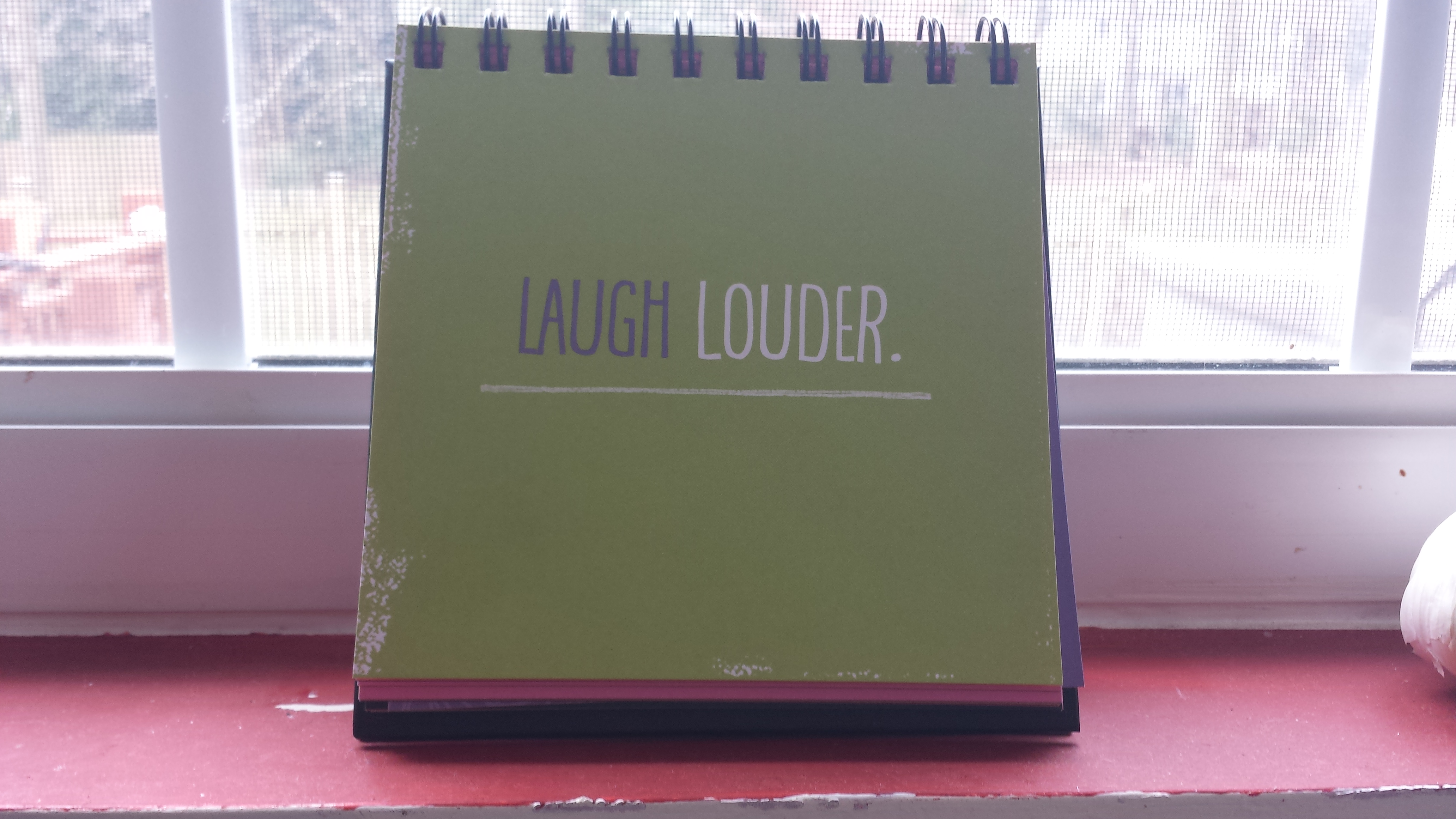 Huh. This was today’s message in the little flip book my friend, Jenn, gave to me. The book has one positive encouragement written per page, so it sits on my window sill above the kitchen sink and each morning I flip it. Today’s suggestion seemed off.

I settled into my days’ work: looking for work. Unemployment is a full time job.

I sent off a proposal I’d been working on all week. There were more emails and unanswered queries. Soon it was time for Lillian, Delilah and my daily “off-leash.” Today we went to the little beach in our neighborhood where we ran into our neighbors and their very well-behaved dog, Sampson, who was on his leash.

Maybe it’s a form of dog bullying. Lillian and Delilah set about demonstrating their comparable freedom.

I’d identified the object as a small turtle carcass.

Delilah wagged her on.

Lillian then bounded across the street, into a yard, and began peering into the front windows, taunting what sounded like one of those small, hairy dogs inside.

She ran to the rear window.

“LILLIIAAAAN COHUUUM!!” I pleaded, following her, armed only with cheese.

Sampson was nonplussed. If Delilah had pom-poms, she’d have been shaking them. I’m pretty sure she mouthed the words, “You go girl.”

Lillian skipped back out to the front yard and bounded toward the beach where her sister was now swimming. Delilah then rolled in the sand. Lilly pounced her approval.

I finally herded my naughty, dirty crew into the car and we headed home for baths, and perhaps a swig of Listerine. It was Hospice night and I worried that Lillian was in much too brazen a mood to visit.

Clean and dry we arrived at Hospice and I clutched Lilly’s leash. Earlier, on the phone, my mother had advised that I give her a “good talkin’ to.”

She sat, angelic and wide-eyed. Then I walked. And she walked alongside. Like a ballerina. She knew it was time to stop screwing around. Well, mostly. She greeted the chaplain with a nose-up-the-skirt. The back of her skirt. Luckily, dog is occasionally this chaplain’s co-pilot.

“Room number one will definitely want to see her,” said the nurse. “And room four will too. They like dogs. Room two is a no.”

We chatted for a while in room one with a woman who used to have a Boston Terrier, and another woman in four, who’d owned every sort of dog ever bred. Lilly was oooh’d and aaaah’d over like a pageant dog. She kissed and cajoled and – well- she just really enjoyed herself. She is beginning to love this work as much as I do, I thought.

We were wrapping things up when I heard singing, just one woman’s voice. I looked into the “no” room and saw the chaplain singing hymns to a woman in bed. The sick woman’s husband sat, entranced. His wife was slipping away.

“Would you like to see Lillian?” the chaplain asked.

We went in, stepping gingerly. We may not have “drop it” down entirely, but we do understand “no.” At least my part of us does.

The woman’s eyes were closed. Lilly nosed her knuckles. The woman, who’d been unresponsive, moved her hand around as if to pet her. I marveled at the power of the pooch.

“I LOVE dogs!” he rather yelled. He was hard of hearing. Lilly went in for a full frontal face cleaning. He began to giggle. She crawled up his lap and loved on his whole head. The man threw his head back, howling with laughter. She put her paws on his shoulders. He leaned back in his chair and guffawed.

His daughter walked into the room, smiled at us, and put her hand on her mother’s head.

“Did you make my daddy happy?” she called to Lilly.

Her daddy was still laughing. Louder.