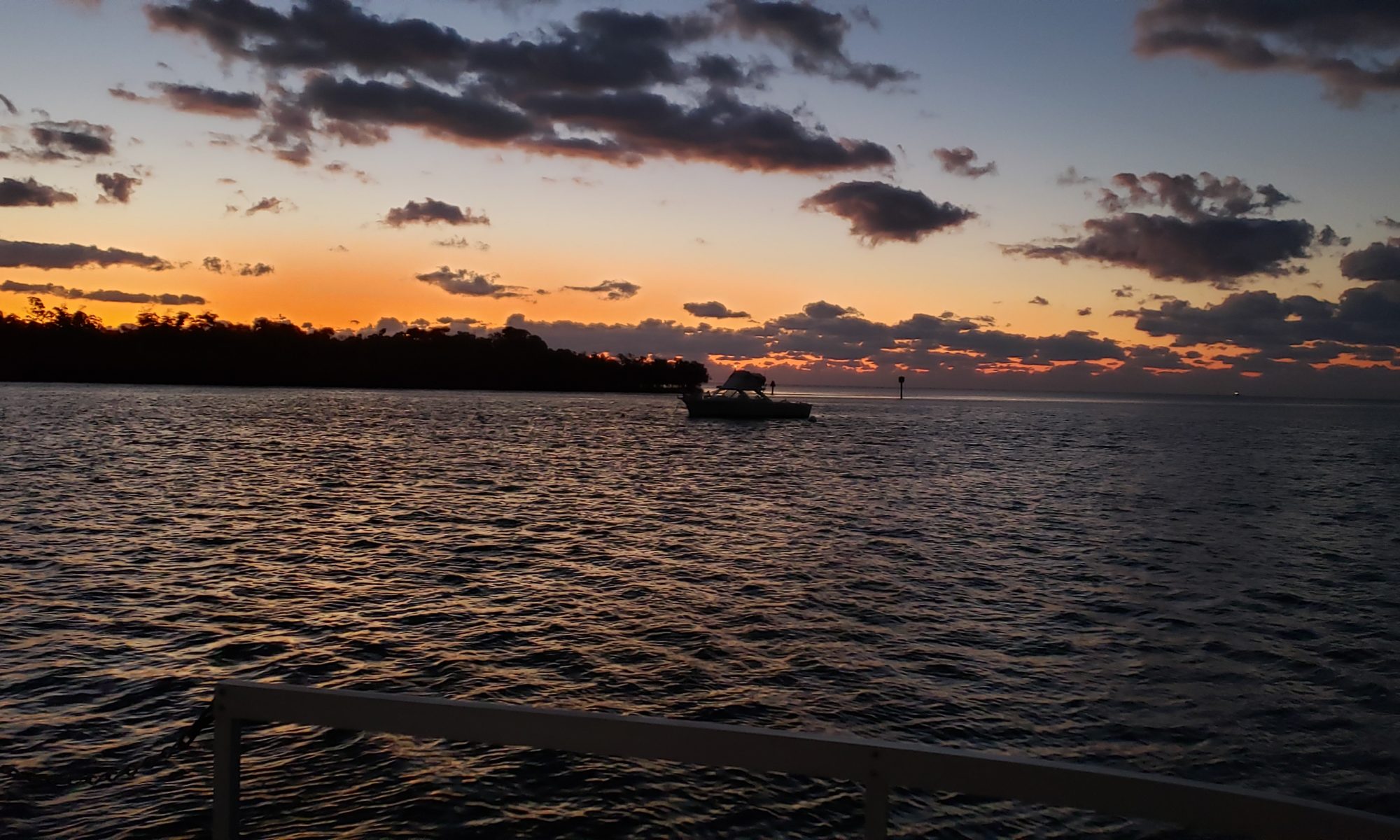 I am skeptical because my husband is a professional salesman. He expertly tells me on saaaaay a Tuesday, that the few days we’re planning to spend in Key West will be very expensive—think $500.00 to $600.00 per night. I wince.  By Wednesday he’s looking at AirBnB, and finds a sailboat we could occupy, but only for slightly less. By Friday’s Coile kitchen happy hour, he’s showing me pictures of a houseboat moored in the Cow Key Channel, which is comparatively economical.  I decide it’s “kitschy.” After our second beverage, he shows me a photo of the houseboat-wife easily climbing from a rowboat, over a seawall, which stands between the boat and the parking area, where our rented Mustang convertible will sleep, awaiting our morning departures to Duvall Street. The wall seems a small obstacle. Besides, I’m not “high-maintenance.” I’m a sport.

A few weeks later, our houseboat hosts pick us up at the Hurricane Hole Marina and ferry us to the mothership. We get an instructional tour, beginning in the galley.

“We have, like three kinds of coffee in there,” houseboat husband offers. I marvel at the generosity of former guests.

“And if you run out of propane, there’s… um… well, there doesn’t seem to be a replacement tank, so we’ll bring you another when we refill your water tank because it only holds 17 gallons.”

“Since there’s no hot water your showers will go real fast. But still you’ll need us to refill the tank. But you won’t even know we’re doing it—we do it from the outside.” I envision houseboat husband and wife hovering outside the window with a tank and a hose, while I jump, blue and naked, from the tiny shower stall.

My skepticism is morphing. It is morphing to trepidation. I am feeling like less of a sport.

“There’s a head forward and aft. Don’t put toilet paper in either of them.” I think maybe I could use a hair dryer, but what’s the likelihood…

“And when the red light comes on, you can incinerate. It’s totally green. Just burns it up. It smells a little, but it’s fine. I’ve been swimming right next to it when it’s eliminating.”

I choke a little, way down in my throat.

I look at my husband. He has his plastic sales smile on.  I can tell he’s wondering how much this is going to cost him, maritally.

“If you have any maintenance problems, just ring this,” she says, gesturing toward a silver bell, the clapper enabled by a shredded rope.  “Our maintenance guy, Howie, lives right there.” She points to a makeshift floating shanty about a hundred yards away. The shanty has grey siding and white trimmed windows. “But he’s not very reliable at night.”

I hope I do not see Howie at night.

Howie’s place and means of summons

Our house hosts ferry me back to the dock so I can drive the car to its spot, leaving Jon to launch the rowboat and meet me at the wall.

I pull the rental car up to the designated spot and scan the cove for husband in rowboat. No sign of him. I get out of the car, slightly concerned, but confident our life insurance is in order.

“Hey!” I look down to see his head peeking over the wall. He looks like Kilroy.

“My feet are in a kayak.” I peer over the wall. Indeed, he’s standing in a tippy little boat. The top of the wall is about five feet higher than his feet. There is no possible way he can scale the wall. Nor is there any way I can jump into the other kayak he’s towed ashore for me. It occurs to me then that the house-wife is about 5’10”. And that photo must have been taken at high tide.

“Where’s the rowboat?” which to me, would have seemed the more stable option.

“What about the SUP board?”  I love SUP boarding.

Eventually we find a sandier spot so I can jump from the wall into the water without maiming myself, then get into my kayak in a fairly civilized manor. We paddle out to the houseboat, which I now notice is named, “Last Resort.”  It very well could be.

We land the kayaks, drag them up to an attached float, and wiggle our way back onto the houseboat by walking up a chain. Yes. Walking. Up. A. Chain.

Entry/exit chain and space for feet on the launch

We decide we will stay aboard now because the sun is setting and our transport dinghies have no lights. We dine on cheese and Wheat Thins.

“Tomorrow morning we’ll just head in and get breakfast and enjoy the day,” I said, trying to convince myself all would be well. Plus, I am sticking with my “sport” persona.

Husband nervously agrees. He fiddles with his phone. We bunk down in the aft cabin after I warn him that he may touch me only for purposes of warmth. Mine. “Sport” only goes so far. He’s soon snoring, but I am vaguely aware that we are tourist targets in the midst of a boat graveyard. I sleep only a couple of hours.

By the next morning, husband is admitting defeat.

“First stop, breakfast,” he says, sheepishly. “Next, I’ve picked out a few hotels…”

We make coffee which perks its last gas just as it becomes drinkable, but I think that I do not need much caffeine because the shower head is spitting icy blades of refreshment. Ready to attempt shore leave, we toe back down the chain to the small boats. It is then I notice the launches are facing the wrong direction. What might have been a fairly simple slip and slide into the sea has been made impossible because the launches are bolted together, facing each other. I hoist my kayak into the air, throw it into the water then awkwardly jump toward it, maneuvering to avoid an ankle-mangling collision with the other useless water vessels on the float. About a million f-bombs are carried away in the 20-knot breeze. The seal on my “sport” mask has now popped.

Eventually we are headed toward the wall where we’d spied a section, seemingly sloped, teasing us with scalability.

Jon went first, somehow heave-ho-ing himself out of his boat and up the wall to the sidewalk, unscathed save for a spattering of pelican pooh.  Since I was wearing flip flops, I chose to step out of the boat into a few inches of water and climb from there. I realize too late, the quicksand-like nature of the bottom, which is sucking me down several inches each time I attempt to reposition.

I stick my hand into the muck, and squealing like a stabbed hamster, pull up a slithery branch, then some snot-covered rope.

“Flip flop gone forever!” I howl, before sticking my bare foot into a cement crevice and hoisting most of myself over the wall, then rolling onto the sidewalk. And so, I arrive on Key West with one bloody knee and one shoe.

We climb into the car.

“Do we need to get you some shoes?” he asks tentatively, sensing I am at the end of my own slippery rope. I squelch an urge to demand some sort of Manolo Blahnik replacement, admitting that I have some sandals in the trunk. He drives to the nearest breakfast-with-a-bar.
Two Irish coffees and one lobster benedict later, we are headed to the Curry Mansion Inn, where we are giddy with relief that there’d been a cancelation. One more night aboard “Last Resort” and we would take refuge in the well-appointed, spit-polished, full-barred, hot water-tanked, toilet paper-absorbing B&B, leaving our full houseboat fare in our wake. We further sooth the insult of our early departure by leaving houseboat wife and husband some beer and Wheat Thins.

We toddle about the Key West bars and shops, husband eyeing various baubles. This would be a costly reparation.