I sat, wide-eyed, staring at my fiancé across the tiny table. We were about to get married. We were tasting cake.  It’s a lot less fun than it sounds.

“Um, cinnamon swirl… and – what were the choices?” I asked.

She sighed and I’m pretty sure, rolled her eyes. She was maybe in her late 20’s, and she ran the place. In a slightly harsher tone, she repeated the list, we made our picks and she turned on her heel toward the kitchen. I thought about Seinfeld’s soup Nazi. Clearly, we had violated some unwritten bakery etiquette.

The cupcake Nazi returned with our cake cubes. We straightened in our chairs, delicately picking at the samples, lest our knuckles be wrapped with a spatula.

“Now, we can do a texture, a fondant, – what are your colors?  Do you have a theme?  What’s your vision?” She rounded her lips like a big cherry lifesaver.

“Ummmmm. I just- I like teal but that doesn’t seem very appetizing on cake…”

The truth was, I didn’t have a theme, or a vision. I was 53 years old and never thought I’d get married, so I hadn’t thought about it much. Did I have to have a theme? Like Star Wars or Snow White or something? Can’t “We’re getting married!” be a theme?

We paid for my chai and Jon’s coffee, eyed some confection called “unicorn poop,” and trudged to the parking lot.

“I thought this was supposed to be fun,” I told Jon tearfully. I was an old bride, and clueless about cake. And themes. And dresses and playlists and seating charts and registries. I had three bridesmaids, all in their forties, who, it seemed to me, ought to be able to dress themselves. Our guests – I suspected, would figure out with whom they would like to sit without direction. Our only goals, from the outset, were inclusiveness and revelry. I did not think anyone needed to be choreographed.

At lunch one day I confessed to my friend, Lynn, that I didn’t really know what I wanted.

“It’s really not for you.” She smiled. “It’s for everyone else.”  I agreed. And I began to think more along those lines.

Several recent brides told me that I really would not enjoy my own reception.

“I didn’t see my husband the whole night!” complained one.

“I never ate, or had a drink,” said another.

“I had bruises on my arms from people pulling me around,” still another warned.

I braced for a very expensive mediocre time and hoped to avoid injury.

In the weeks that followed, our guest list blossomed. Relatives and friends were coming from England, California, Ohio and Kentucky.  People we’d only hoped might be there were hitting “accept” on our jonandterese.com website. We were flattered. I was terrified.

While the wedding dress people were less harsh than the confection queen, they still were very interested in my “vision.” The old storybook version of Cinderella has a picture of fairies arguing over what color Cinderella’s dress should be, resulting in a half pink, half blue number. That was as far as my gown fantasies had gotten. Forty-plus years later, “white” was pretty much all I could conjure. At one very foo- foo shop I stepped out of the dressing room and saw one of my bridesmaids,  Krishna, beaming. And so, it was decided.*  I didn’t truly love the gown until the seamstress got a look. As she tucked and pulled, I looked around her shop where several heavily beaded and laced gowns were bending their hangers. Mine was bling-less, with an elegant cut, helped along by a severe protein and vegetable diet. I marveled at our good taste. She thought we’d made a superior choice.

The wedding day zooming at us like a freight train, my groom and I spent the remaining weeks adjusting crowd numbers with oyster shuckers and crab catchers, and expanding our tent and table order. Jon and the groomsmen ran extra electrical lines to support the band and porta potties. We wrote and printed a detailed program and hosted Reverend Bill for dinner. We met with Doyle our friend and bartender, compiling an intimidating list of booze, beer and wine. I poured over wildflower orders for what would be a slightly chaotic DIY project. Each day, I eyed my neighbors’ feathery pampas grasses, which they’d promised me for centerpieces. Thankfully, the bridesmaids easily agreed on dresses and shoes,** despite some early raised eyebrows at my insistence on black. I worried that Lynn, who was hosting all three events at her beautiful waterfront home,(the rehearsal dinner, the reception and Sunday brunch) would grow wedding weary.

Even as we wrestled with every detail, I still didn’t have a mind’s eye.  It was all a jumble of jobs, hopefully ending with me somehow getting up the aisle, followed by some facsimile of a party.

Events began to unfold on Thursday with an almost in-law dinner. There were no incidents.

Our rehearsal was followed by a walk in the labyrinth on the church grounds. Jon and I had planned to walk it alone and were surprised and honored when we were joined by the Buckley family, bridesmaid, Jenn and her husband and groomsman, Craig. The crabs were sweet and the wine flowed freely afterwards.  Dan Haas, a local musician, played just right the sort of music. I had a fabulous time swooshing around in a splurged-upon dress, visiting with college friends, and cousins and watching a few become uncharacteristically overserved.

Saturday began with a 5:30am run with Jenn, which did a lot to settle my nerves. Then we ran the dogs which settled them as well.  A cleaned-up Jenn, along with Claire and Krishna showed up on queue with breakfast – and the hair and make- up frenzy began. All of the sudden it was time to get dressed.  Everything was coming together. I was oddly calm.

Jon and I had our “first look” photos taken at home along with some family shots. He looked handsome and happy in a plain black tux, a pocket square I’d picked out and the boutonniere we’d fashioned from a black calla lily and a rose.

I rode to the church with Claire and her husband Chris, who kept me hidden from the 200 guests, swarming the doors. As I stood outside, holding my brother’s arm, waiting for Trumpet Voluntary (Purcell) to begin, I marveled at the day. The flowers were stunning, the bridesmaids gorgeous, Lillian and Delilah, decked out in sparkly collars and haute black leashes, were behaving like perfect attend-dogs.

Because Jon was raised Quaker our ceremony included an element of “Meeting for Worship” in which everyone is invited to speak.  I’d pictured a silent, confused and bored congregation. But a few Quakers and non, spoke warm and beautiful words, sweetly bringing laughter and of course a few tears. Best of all, when the “meeting” closed with the sign of peace, Jon and I lapped the entire church. I worried that it took too long, but I loved seeing everyone close up in that moment.

Our guests gathered on the lawn for a 200 -person team photo, everyone wearing victory medals Jon had designed.  Then we were swept away to a nearby marina, where a chartered boat waited to take the bridal party to Lynn’s. It was one part of the plan I’d requested, but my “vision” had still been cloudy… how would I navigate getting onboard in my dress and shoes? What if it was windy? Would we all arrive with our over-goo’d and sprayed hair standing skyward?

We pulled away from the dock, the sun gleaming on the white deck and our rhinestone shoes. I looked around the bay where I’d spent countless hours kayaking, SUP boarding and swimming. Now my new husband and I were being motored across those same waters toward all of our friends and family.

As we rounded the point, the billowing tent and lawn party came into view.  Guests milled about with snacks and cocktails in hand as the band played its first set. It looked like a scene from movie. I scanned the crowd for Vince Vaughn and Owen Wilson. But no, those were our friends. This was indeed, our party.

I snapped a photo in my mind. Finally, my vision. And I understood why I didn’t have one until that moment. It was simply more grand, more elegant and more perfect than I could have possibly imagined. 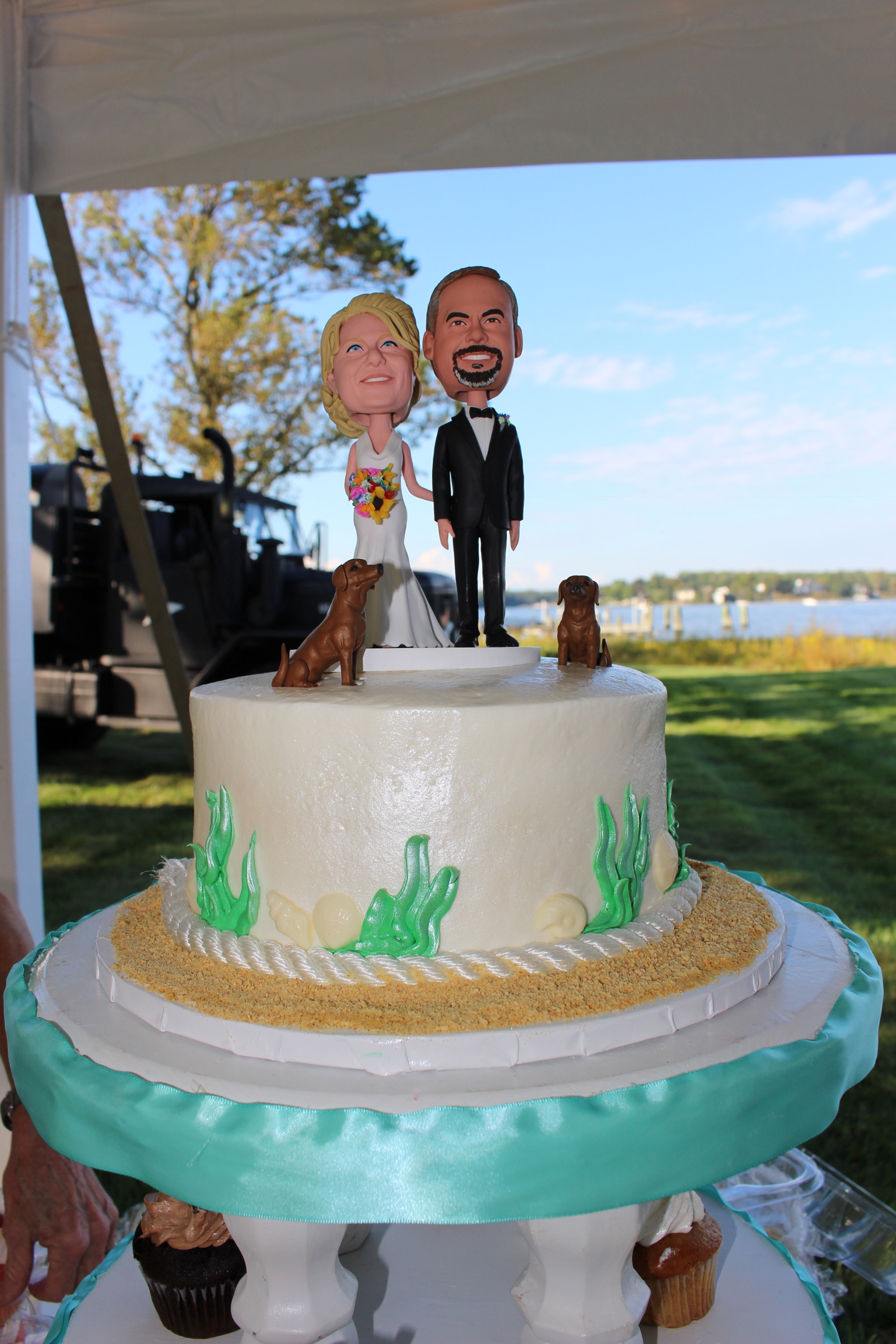