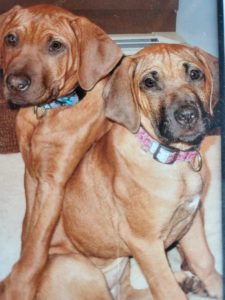 Delilah arrived in my life as part of a puppy pretzel: two coal-black noses, furry necks and warm, round bellies, intertwined. They were delivered in a crate to Baltimore Washington International Airport, groggy and jetlagged, having traveled all the way from Idaho. She and Lillian were wrapped around each other and then me and then us. The unraveling has left our little family threadbare.

To those of you who’ve been following along, especially Dr. James Pelura, Megan and Tammy, thank you all for your support through D’s illness and now her death.  I can’t bring myself to say the cancer won. I can’t give it that. Fuck cancer.

Canine lymphoma is fairly common. If you’ve been following this blog (aka the DLOG) you know Delilah’s symptoms began in late July. She simply stopped eating. Then the nodes under her chin swelled. Her spleen bloated. Tests confirmed the worst, and we gave her prednisone and began chemotherapy, in the form of a pill called Laverdia ca-1, two times per week. But her tummy wouldn’t tolerate the powerful drug and we had to stop. Two weeks later we started again. This time she kept the pills down and the nodes receded. She got some spring back in her step. She ate well. We were optimistic. 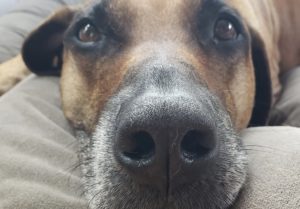 But then there were more lumps. They were round and large, like marbles, on the back of her neck. Then everywhere. Dr. Pelura thought perhaps it was an allergic reaction, so we added Benedryl to her meds. It didn’t touch the lumps. And despite consuming gravy-soaked chicken breasts as fast as I could cook them, she continued to lose weight. In her last 24 hours she managed to walk outside to lay on the patio.  She loved being out there. But she began to shake with the fall chill and was too weak to walk back inside on her own.

Of course, I’m second-guessing everything. If only I’d caught it sooner, if I’d started the chemo back up faster, if I’d not left for ten days to move my mom out of her home in Phoenix, if, when, how, I did, I didn’t, I failed to keep our girl alive.

Lillian is doing okay. She was extraordinarily kind and protective of her sister, in ways I didn’t think she had in her, through the worst of D’s illness. But it seemed to me, maybe a week before Delilah died, Lillian checked out. She went back to being her A-dog wild-child self. Like she knew. As if she wanted to separate herself from the finality.

I always say dogs know everything.

Lillian doesn’t do well with big, heavy emotions. It only takes a sigh to send her skittering from the room. Both of our bathtubs have paw prints in them because that’s where she retreats when I cry so I’m trying to cut down on the sniveling. She’s become more robust (Jon thinks I am too critical of their mutual girths.) perhaps in order to absorb all of our extra affection.

Thank you all, again, for understanding this grief. Not everyone does. 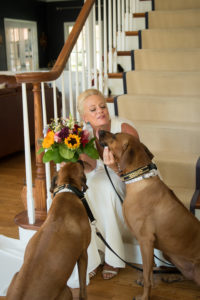