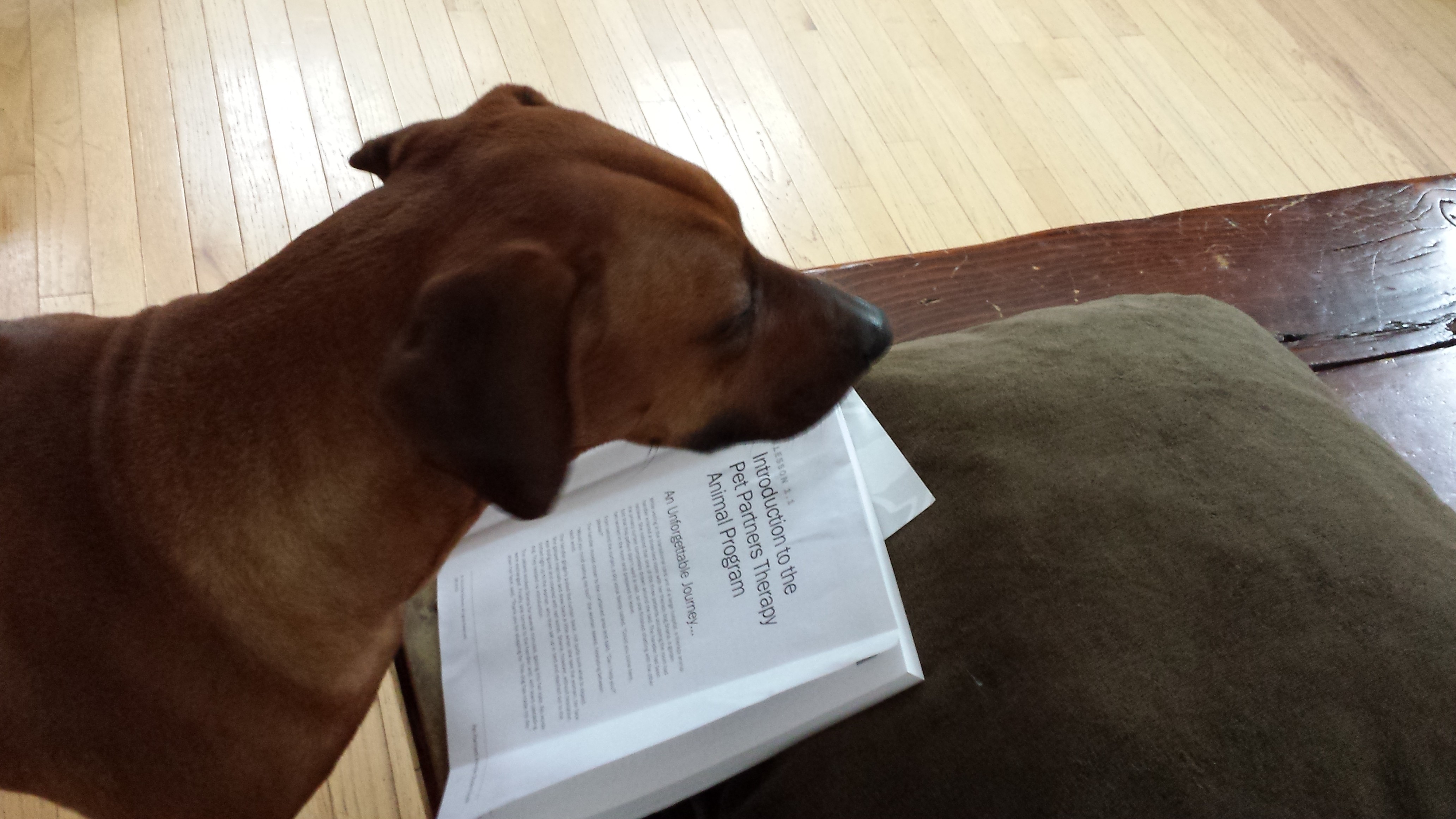 “Please get better control of that dog,” Laurie, the pet therapy evaluator-not-judge said, with more patience than we deserved.

I wasn’t sure how getting better control was possible. We had trained. We went to school once, sometimes twice per week, for two years. We added additional, expensive classes specifically to train for these evaluations. We’d drilled our exercises, morning after morning, in the middle of our little street. We’d danced through hospital scene obstacles, like crutches and walkers. We’d acted casual in the face of crashing bed pans. We’d greeted politely.

But we were choking. Lillian was all over the place, breaking from her heel like she had fire ants, then planting a slick wet one on the evaluator’s face. She was the Bode Miller of dog tasks. Likely what Lillian did most was pick up on her mom’s nervousness. Dogs know everything.

Lillian and Delilah are lookers. And they’re pretty smart. And they’re a lot of fun. But I don’t believe smart, fun girls should just sit around looking pretty. They need jobs, careers even. They need to give back.

What better job for pretty, fun girls than to stick their noses in sick, sad, or otherwise challenged humans’ faces, and make them smile, even if it’s just for a minute. That makes that minute better than their last one, right? Who knows, maybe we could stretch it out to five minutes, without being asked to leave. (We can cut quite a swath.)

Disheartened, we careened through the final exercise.

I actually got teary. Lilly actually relaxed. I don’t know how it happened but Lillian is now an eligible therapy dog. We did not qualify to go into high stress situations. But we would be allowed to hang out with the somewhat stressed.

A few hours later, I returned to the evaluation site with Delilah. Certainly we would sail through this—we’d accosted everyone in my neighborhood, begging them to practice polite greetings with us. Only the day before I called a man in his pajamas from his garage to walk up to us and shake my hand. Lilah would sometimes stand, but never jump.

Laurie approached us for the mock greeting. Delilah jumped up on her like she was holding a steak.

The next phase involved Laurie petting Lilah roughly, like a child or an elderly person might. My dog, who normally melts like butter, went stiff as a day-old carcass. I knew we wouldn’t do well with the ear grabbing, but she reacted like Laurie was the mayor of San Diego. Laurie stopped the test. Delilah would not be fun for a sick or otherwise upset person to play with.

“Timid?” I thought. How could I, a forever single, do-it-myself, “Excuse Me, Mr. President” journalist have a timid dog? Suddenly I had something slightly in common with Dick Cheney. And that kid on “Glee” s TV dad. But the word was “timid”.

On the way home in the car I wondered if Lilly would know Delilah didn’t make it. Would Delilah know Lilly had? What do parents of children do when their bigger kid makes the soccer team while the smaller, sweeter kid, gets cut?

My friend Krishna called, and for the second time that day, I cried. Delilah looked out the car window and barked at some guy wearing a big hood. I couldn’t believe I was taking it this badly. Being a good friend, Krishna took my sadness with all seriousness, politely dismissing the fact that I had become deranged.

I explained to Krish, that I needed to find out what Delilah was good at, and encourage her in that direction, lest she develop poor self- esteem. She already wore too much eyeliner, clearly an attempt to disguise her true self from the world. What would D be good at? How could we make up for this gaping hole on her resume?

We arrived home. I pulled my misshapen Jeep into the driveway and lumbered toward the door. Hopefully Lilly wouldn’t gloat.

We walked in, Lillian delivering her typical paw pounce to her sister. Delilah bounced back. I began to also.

The girls are training me. They’ve been trying to tell me not to pull so hard on my leash, or I’ll choke. I need to let more things roll in over the back fence. Good things will come. Bad things will pass.

Still. I think I’m going to take Delilah lure coursing in the spring. She runs like a joyous jack rabbit. And I am excited to get Lilly started with the therapy program.

But meantime I will sit. And stay.