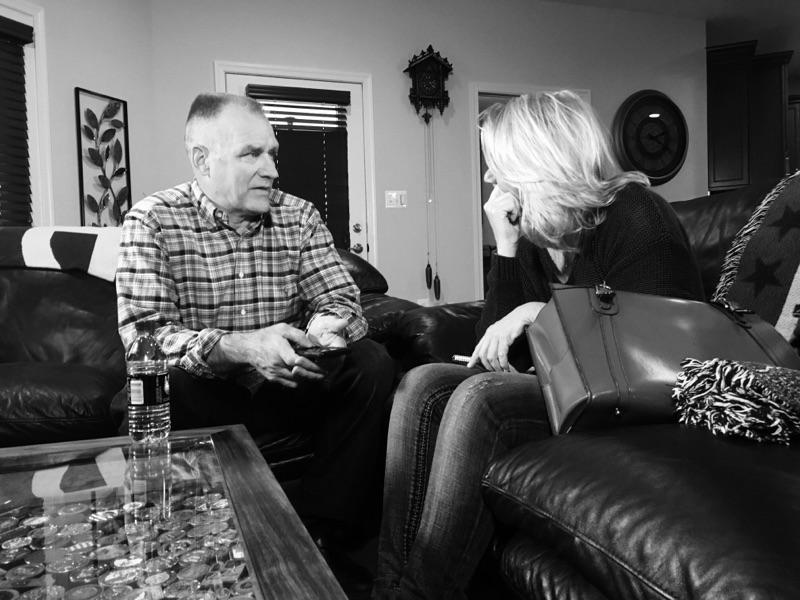 Well. I never thought I’d be doing this.

I am not cuddling a cat, sewing my own clothes, or kissing a girl.

I am standing in line at the Alderson Federal Prison Camp for women, waiting to be frisked.

I am going to visit my friend.

It is Mother’s Day.

The sun has been rising over the asphalt for more than two hours.  Every once in a while a guard yells out instructions. Have your ID ready.  No chewing gum.  Carry only your car key. And you know that lady yells that stuff 3,276 times per weekend.

“Did you fill out the form?” a helpful prison mom asked me.

“I didn’t know there was another form,” I answered, form-weary.

I checked the final set of boxes.  No, I was not carrying a firearm. No, I was not a felon. Yes, I was acquainted with the prisoner before her incarceration.  This was not a blooming Internet romance.

“Once you are through that first set of fences, be sure you stand ten feet away from everyone else in line,” a pleasant Midwestern couple advised.

I would be more alone.  This made me happy.

Having finally reached the point of pat-down, I was told to pat my own ass.  It seemed a lot like checking my own box.  Do-it-yourself security.

I patted, signed something else, then waited.

It was only about ten minutes before my friend emerged.  She looked good.  No, great.  Really, really great.  We regulation hug.  I think “prison becomes you,” but I don’t say it. She calls prison “mean fat camp,” but Jillian Michaels wouldn’t have lasted a day in here.  My friend is down more than 30 pounds.  We rush the vending machines, which will provide our only source of sustenance for our time together.  I think of all the big, fat Greek meals she’s cooked.  I think of the pea soup, and what have you that she would leave outside my door.  We futz about looking for two empty chairs.

We sit, and it’s loud and we are literally and figuratively guarded in these close quarters. Everyone is extremely polite, including me.  I’m puzzled until I realize it’s just not a crowd where you want to push the envelope. The question wouldn’t be on the form if no one ever tried to pack in here.

After an hour she has to go into another room for a head count. In case I had hidden a firearm in my self –patted ass pocket and had quietly busted her out.  Would I be in more trouble for helping an inmate escape…or lying on the form.

Now we are permitted to go outside. We find a bench in the sun, and sit, snacking. And then the noise, the people, the fence all fade. We are in her living room, in our shared Adams Morgan apartment building, where I’d spent countless hours, over many years, gossiping, drinking wine, she cooking, me eating. We have a lot of catching up to do.

She tells me she has opted to stay in the transitional unit so she gets different roommates frequently.  The last one had a perfect blonde bob.  Until she turned her head. The other half of her skull was shaved and covered in tattoos.  A half-cap. All Wisteria Lane on one side, Jack’s biker bar on the other.

I remember that she hates beige.

She tells me her brother sent her a book called “Eight Minute Meditations.”  The thing about prison that bothers her the most (besides the being locked up part) is the noise.  She says there is always someone yelling. She seeks the quietest corner she can find and remembers her serenity mantra, “ShutTheFuckUpShutTheFuckUpShutTheFuckUp.”  She says it works.

I worry out loud about her occasional temper.

She says she only got angry with another prisoner once.  The woman was trying to explain to her that those incarcerated for participating in the drug trade lived by higher standards and morals than those white collar criminals who’d pocketed other people’s cash.  Because buying and selling lethal street drugs is an honest business, no matter how many people wind up dead. This. Got under her skin.

We discuss her childhood friend whom I’d dated, her family, my family, her husband and her 10-year-old daughter.

I do not want to bring up the obvious comparisons to the popular television series. But she does. Because the Russian character, Red, is based on a former Alderson inmate, who is not actually Russian, but Greek.   So when the woman violated her parole and was sent back to Alderson my friend sat with her at lunch one day. And she leaned over and spoke to the woman in Greek.  And there in the lunch room of the women’s prison, together, they sang a little Greek song.

She tells me about the corruption.  She talks about abuses of power and green, watery sandwiches on Thanksgiving. I avoid topics like cool cocktails and good food. We try to remember how long it had been since I moved out of Adams Morgan. We talk about when she will leave “camp.”

I look at my feet which are red and puffy. It’s hot and the vending machines are out of water. We decide to go in and check the time.  Visiting hours end at 3pm and I figure it’s about noon.

As of today, there are 27 bottles of beer left on the wall.  That’s how she’s counting. And she knows she’s now a short-timer as fellow inmates are asking her for her stuff.  So far she has given away yoga pants because they are too hot and a bra, because it is too big. Weight loss for women is universally unfair.

And now, there is less than a month of e-mailing left.  She will come back into the world and I pray, pick up where she left off.

The irony with us is that while she’s been in prison we’ve been much more in touch.  We’ve been great pen pals. We writers like a captive audience.  And soon, she will no longer be that. And that part of prison, I will miss.