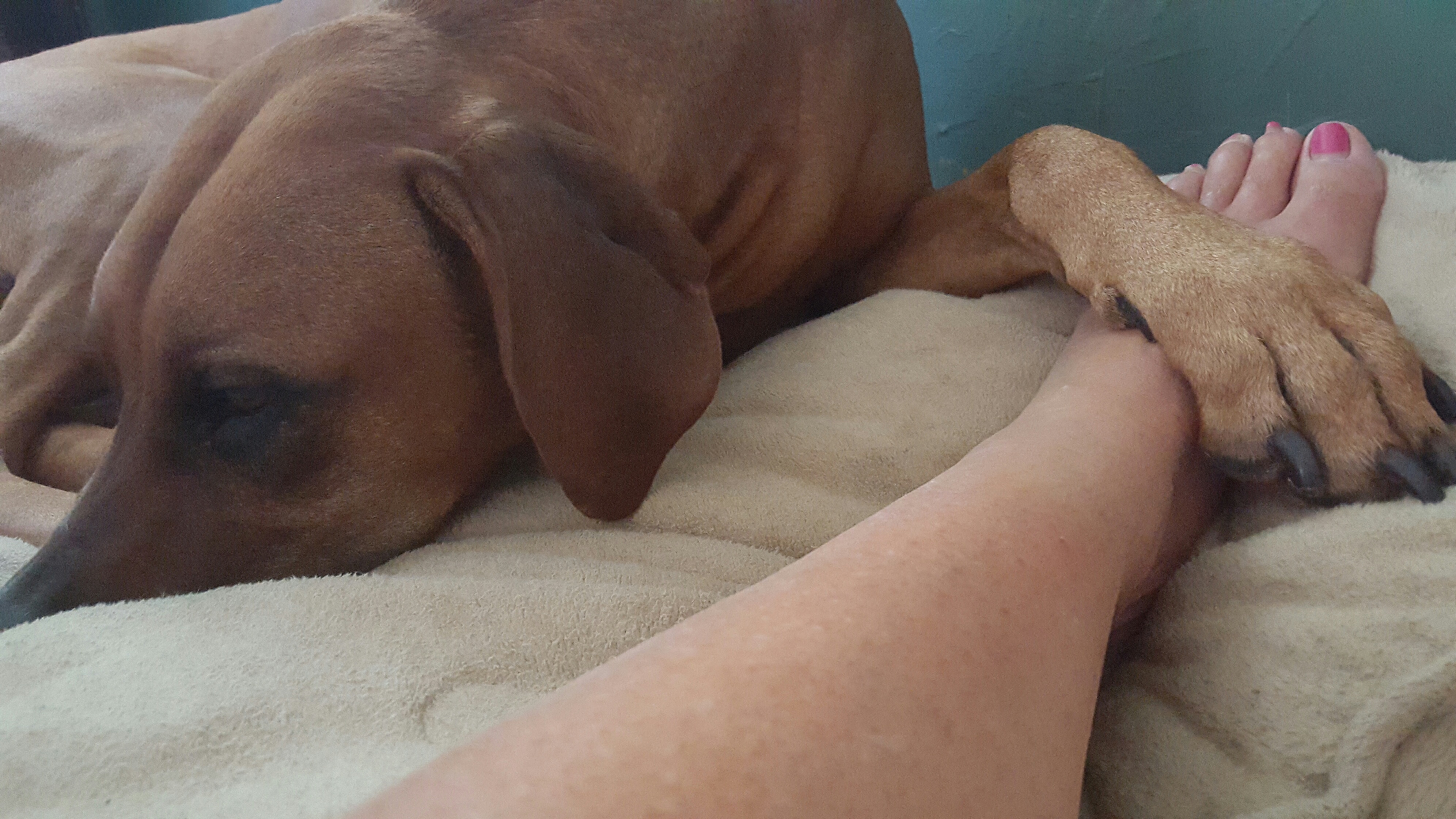 I’m in Nordstrom looking like I’ve been tarred and dog-haired.

“I’m good,” I mumble, keeping my baseball cap- covered head low, like that might disguise my odor. It was around 3:30 in the afternoon.  At seven that morning I’d run 5.7 miles with two two-footed girlfriends, getting home just in time to throw my four- footed pals into the floppy roofed Jeep and head to the vet for their 9am appointment.

Lillian doesn’t mind Dr. P too much.  Delilah is more skeptical about him. He rocks my doggie world.

Delilah went first. I thought she would be a little skittish. She was satanic. It took three of us to hold her down for shots.  After that, apparently Dr. P had chosen some sort of medieval tool to trim her nails, as she was literally shrieking. I looked at his hands more closely. He had not. It was 9:15. Why didn’t they sell cocktails here?

We went to the dog park, where a recent layer of snow had created more mud, which mixed into a tacky paste with the hair and my now 8- hour- old sweat.  Then we went to Nordstrom.  The girls stayed in the car.

“You’re making your second pass, so you clearly need some assistance,” said the helpy, perfectly well put together and handsome menswear salesman.  No. Consultant.

“Okay, here’s the deal,” I said, keeping my distance, “I am going on a third date tonight. Third.”  I held up three gritty fingers for emphasis.

“And you’re getting him something?”

“Oh yeah, you gotta get him something.”

“I know. I ordered a stuffed bulldog online but it hasn’t arrived yet and it’s tonight.”

He camouflaged an involuntary eye roll.

“It’s only our third date!”

He led me dutifully from table to table.  He showed me a plaid number.

He ever so subtly glanced below my gaze.  I kicked a mud crumb under the table.  I bought a tie.

The make-up department girls looked at me wistfully as I bolted out of the store. No. Out of the experience.

I went home, and pulled into the driveway as the UPS guy arrived and handed me the bulldog.  It would now be a tie-wearing bulldog.

A shower and some shaving later, we were at dinner, after which, I presented the over-dressed dog.

He complimented the tie and gave the dog a squeeze.   The waiter brought us a dessert to share.  He (the date, not the waiter) set the tie aside.  He continued to occasionally pick up the dog, looking into its poofy, smushed -up little face.

Being a chronic dog-squeezer myself, I find this promising. 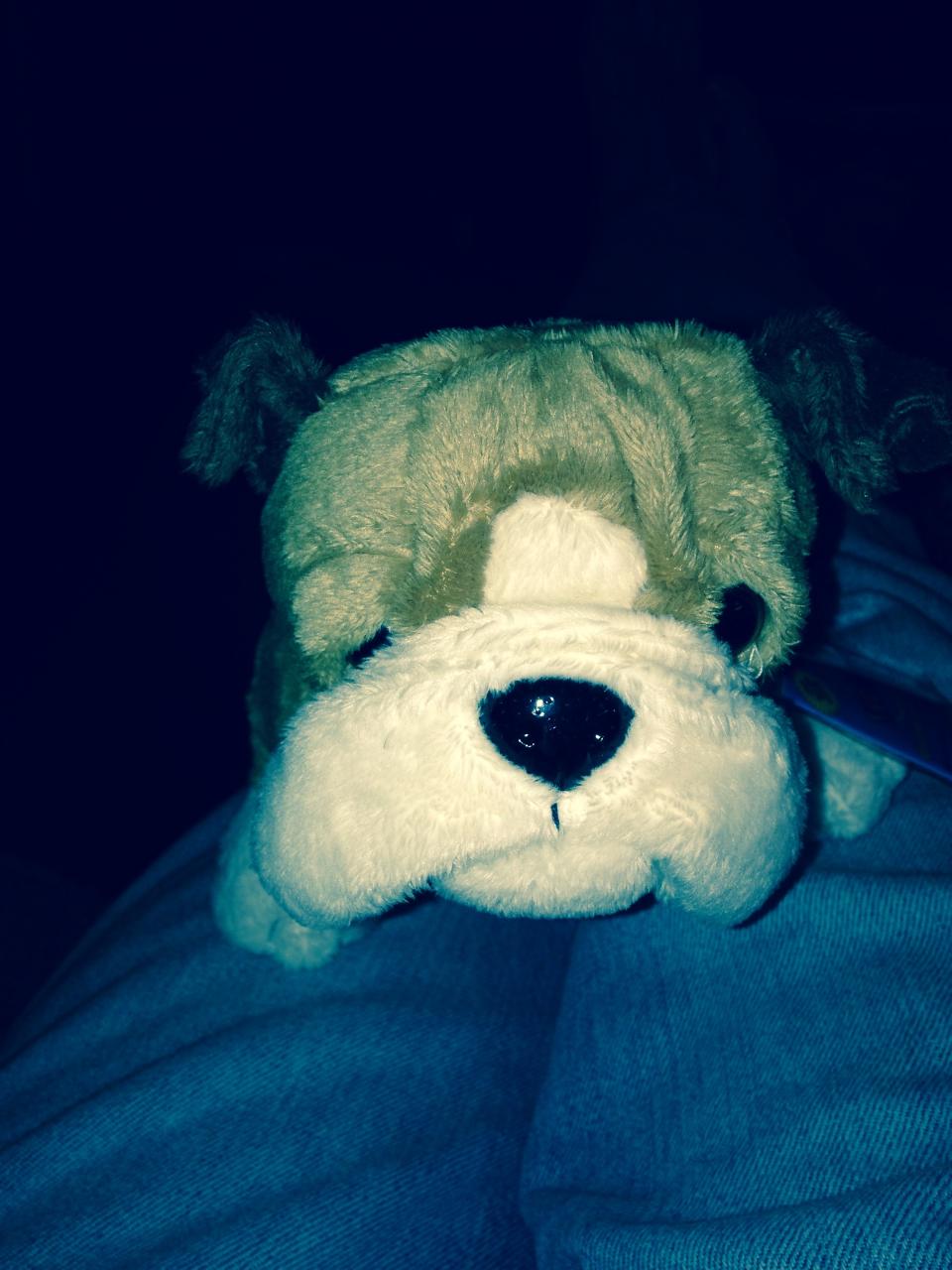 This edition dedicated to Gates, in honor of a life well lived in support of one of our nation’s great “hospitalitans.”

Delilah contemplates whether a relationship with this particular man would last.

“Moe, I’m breaking up with you,” I announced in front of all the disgruntled owners in the Jeep service department waiting room.

“Let’s talk about this.” He dangled my keys by the paper service tag.

We’d been seeing each other regularly. Our relationship was purely automotive.

One pleasant summer Tuesday evening I was leaning in to the back of the Jeep, returning Lilah to her sister, when I felt something clunk me in the head. I looked up to see a clump of wires hanging from the top of the rear door. I followed the wires to where they disappeared behind the door molding which had been separated, apparently by Lilly, from the metal. Aghast, I slammed the hatch down quickly before any of the mommies and daddies of well- behaved dogs could see that mine had just remodeled the Jeep’s interior and yanked out my brake lights. I drove home slowly, trying to be inconspicuous, and, of course, duct taped the wires back behind the molding. Duct tape being a puppy delicacy, it wasn’t long before the tape was swallowed and my rear windshield wiper hung, useless, on the glass.

I explained this all on the phone to Moe.

“Puppies? Right. Bring it in,” he mono-toned. He’d heard everything. He believed nothing.

“How BIG are these PUPPIES??” he yelled when he saw the door carcass.

“They may be tall for their age…”

And that’s how Moe and I met.

It took some time and a few traffic citations before the proper electrical harness could be located and installed. But there was another problem. My wonderful fully retractable roof was stuck, more or less open. Moe and the greasy nailed guys took several swipes at it but in the end admitted it couldn’t be fixed but could be replaced for $3000.00.

“Whatdjer DOGS stick their heads up through it?” Moe asked.

“My girls had nothing to do with this. Jeep should buy me a new roof, or offer me a deal on a new car.”

Moe introduced me to the “good” salesperson, who eventually offered me about half what my well- ventilated and broken- in automobile was worth on a trade.

“Hey, “Good” Salesperson, my Jeep is worth twice that.” 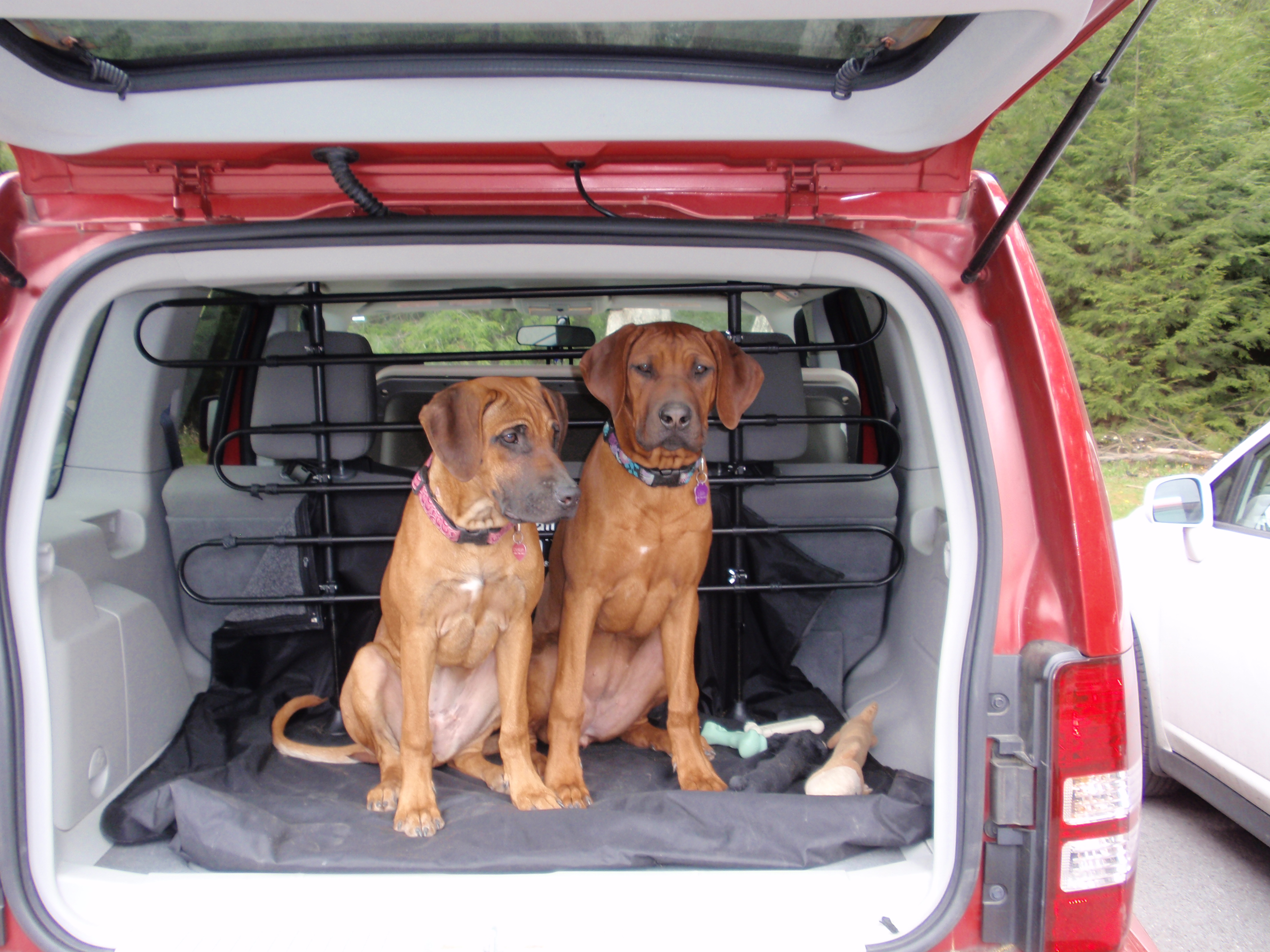 “Uh, yes, but there’s a problem with the roof,” “Good” Sales person answered. I internalized the fact that Moe’s version of good = gargantuan breasts. Those, she had.

Lillian, Delilah and I are still traveling about half-topless. When it rains very hard water pours out from behind the lights over the dash which keeps dog hair from accumulating. I do not have to crack the windows for them while they wait for me in the car. The “wet car” smell has replaced the “wet dog” smell.
Moe and I remain estranged. However, like divorcing parents, we still have the puppified Jeep between us, ‘til its death do we part.