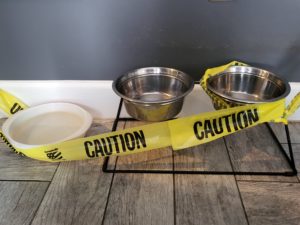 Twice, I have nearly rolled across the marble-top kitchen island, diving for the girls’ water dish in order to keep Lillian from lapping up tainted refreshment.  On several occasions I’ve slid like Lou Gehrig into home, catching Delilah’s drool with a paper towel before it turns the wood floor into a hazardous waste site.   At night I could be mistaken for a worm charmer, decked out in a headlamp, white plastic gloves, carrying plastic bags and a water bottle.

Canine chemotherapy isn’t nearly as glamorous as everyone says it is.

I decided to re-take control of my blog (I’ll return it as a DLOG as soon as I’m done here) to explain how some of this canine cancer stuff works. As Delilah’s bespectacled, dogged research showed, (see DLOG #1) canine lymphoma is pretty common. So, hopefully this will help someone.

Delilah flunked the cancer test about six weeks ago now. After talking with her veterinarian, who is not a drag-it-out sort of doctor, my husband Jon and I decided we’d give this pill form of chemo- Laverdia-  a try.  We started on a Monday, administering a pill every three days. Chemo days would be Mondays and Thursdays.

For three days following each pill, her saliva, urine and stools present a  hazard to children, other dogs and the pooh-picker-upper. That’s the reason for the crime-scene gloves. As an extra precaution I squirt water anywhere she leaves a trace. At night, the headlamp is so I can see all of the, well, circumstances of her pooh. And so I don’t step in my work. Lillian gets the run of the back yard. We walk Delilah out front. Sometimes, when we’re sure D is empty we supervise her in the back yard so she can frolic a bit and lay on “her” outdoor sofa.  Sundays, family day, are chemo free. Trickiest is the water bowl situation. Two bowls is just two bowls. I thought of labeling them with their names, but while they are pretty good typists, (see the DLOGS) it turns out they can’t read.  So I do a lot of bowl rinsing. 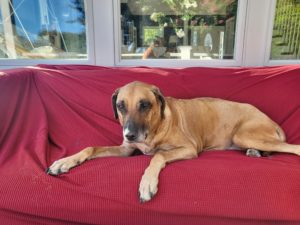 The manufacturers of Laverdia  say most dogs don’t become ill on the pill. D is apparently not “most dogs” as her whole dinner wound up on our bedroom floor around 1:30 in the morning that first Tuesday.  Thursday’s dose came back up around 10pm. The following Monday, Labor Day, I came home from a neighborhood party to check on her. She stood up and vomited bright, red blood.  Her eyes were weary. Her body, thinning. I tearily went back to the party to get Jon and we came home to spend what we thought was our last night with our girl.

I called the vet Tuesday morning expecting to schedule her final rest but was met with undaunted certainty. “This is not the end,” Tammy told me.  Dr. Pelura said I was to stop the chemo and do what I could to rest her stomach. “We’ll just call this a minor setback,” Tammy said.

So for two weeks I coaxed and tempted and tried various doggie delicious dishes that she might eat. At first she refused everything. Gradually a combination of chicken, pumpkin, a bit of regular dry dog food and most importantly, I think, chicken gravy seemed to do the trick. I also administer an occasional mini-pint of Ben and Jerry’s doggie ice cream. D gets most of the treats but I slip a little to her forlorn sister, making sure that healing one pup doesn’t cause obesity in the other.

The “other,” Lillian, has been, surprisingly, an exemplary sister.  She doesn’t (often) steal her sister’s special food. She is respectful of D’s space, while at the same time quietly hanging out with her in whatever cool, dark space D finds, most often our exercise room. (D always liked to do Doga.)  Lillian has sometimes embarrassingly, become more protective, barking at other dogs with slight aggression. She never did this before. And when we went to the park last Sunday D tired out so Jon walked her back to the car while I continued on with Lilly, who needed more exercise. Except it was nearly impossible to get her to run the other way. She just didn’t want to leave her ailing sister.  I thought all of this was my imagination. But Dr. P confirmed. “She know’s she’s sick,” he told me.  This. Tears me up. 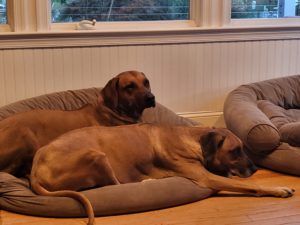 Lilly keeping her sister company, whether she wants it or not

This past Monday after a sleepless night, I called the vet and got the thumbs up to re-start the chemo.  “If she vomits, we’re out,” I told Meghan at Dr. P’s office.  “I understand,” she said quietly.  Again, I slept with one eye open. But Delilah’s remained, peacefully closed. She had refused dinner, but snoozed well and gobbled her chicken-pumpkin-gravy breakfast in the morning. She’s spunkier this past week and the light is back in her eyes.

She gets another dose tomorrow.

Today, I am hopeful. The knot that’s been in my stomach for the past six weeks is loosening. Perhaps our little family will stay intact for a while longer.

The girls will keep in touch.